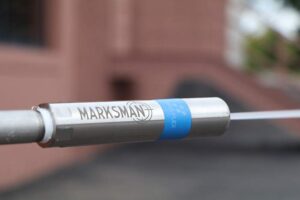 When representatives from Savage-based fluid-handling engineering and manufacturing company Hydra-Flex Inc. sat down with customers at MacQueen Equipment, they expected to walk away with new insights on topics like production and distribution. Instead, they heard about gunk — and plenty of it.

“That was an eye-opening talk about what it takes to keep sewer systems operating, especially public works stations, where the pumps are regularly filled with unmentionable things,” recalls Hydra-Flex’s director of sales, Mike Tonies. “As they described how these stations were cleaned, it was clear that public works employees were putting their safety at risk every time. Because of that, many stations weren’t getting cleaned as often as they should, which impacts the whole system.”

In talking about better approaches, executives at Hydra-Flex saw an opportunity. Rather than having workers lower into confined, filthy spaces in a harness and manually scrape at the “unmentionables,” why not use a targeted, high-pressure nozzle to spray the gunk away from a safer distance? They answered the question by building exactly that.

The Marksman nozzle provides an accurate, controlled flow from over 20 feet, making it ideal for cleaning accumulated solids and grease buildup, while reducing the chances of damaging electrical components and pumps, Tonies said. Early customer feedback has been glowing, and many are reporting that a dirty job that once took up to 45 minutes per cleaning session is now down to a much safer, much shorter duration of about 15 minutes.

That’s led to more frequent cleaning of the stations, Tonies said, which will likely have a ripple effect in terms of better sewer system operation and fewer backups in the lines.

Any homeowner who’s ever gotten sewage in their basement will appreciate that step forward, he added, and it also provides more cost efficiency and even better water conservation since the Marksman’s focused stream lowers water usage during cleaning.

Introduced in June 2020, the Marksman has already built significant buzz in the public works field, with inquiries coming in from across the country as well as Australia and New Zealand, Tonies said. Since launch, over 200 units have been sold, but sales are on such a major growth track that the company expects to meet its projected forecast of 1,000 units sold by the end of the year.